skip to main | skip to sidebar

Mary, still aching from the loss of her friend, went to the tomb with some other women to anoint Jesus' body. It was a custom then to do so, and to pray over it and wrap it. As they walked to the simple hole in the side of the mountain they were all surprised to see the stone that had covered it to keep the animals and bugs out had been removed. Mary was a little petered at this - it was a sign of disrespect to leave a tomb unopened. She saw the gardener standing with his back turned, so she walked up to him, with the full intent of griping at him for such a mistake.

"Why is this tomb open?" She demanded. She then turned to look inside to check on Jesus' body, but it was empty. Angry and upset she returned outside to find her companions staring in awe at something behind her. She turned and shock filled her body. There, atop the stone, sat a man all in white. He was smiling joyously and had an ethereal glow about him. "Why are you looking for someone that's not there! Jesus isn't in that tomb, HE HAS RISEN!"

Mary and the others turned to return to the base camp. Faster than she, the other women went ahead. Mary weakened and collapsed to the ground, sobbing.
"Woman," sad a voice with a familiar kindness and love, "Why are you crying? Who is it you are looking for?"

Mary looked up and her heart soared with joy and love as she saw the man standing before her. How was it possible? Through some wonderful miracle of the Lord, Jesus was standing right in front of her. He gently touched her cheek, and wiped away the tears that were streaming down her face in rivers. "Mary . . ." he whispered.

"Mary, let me go. I still have to return to the Father. Go tell our brothers that you have seen me and that I am returning to God."

Mary kissed the ground at his feet. She didn't want to leave, she wanted to hold on for dear life. But she knew that He was right. She turned to return to the inn where they were staying.

"I have seen Him," She said breathlessly as she ran into the meeting room. "He's alive. He's risen again!" The men stared at her - she obviously had had a little too much wine.

"Who are you talking about, Mary?" Peter asked.

Then men all stared at her, mouths open. Thomas' face betrayed his thoughts - he thought she was a loon.
But Peter got up, placed his hands on her shoulders.

"Mary, are you sure?" Mary nodded. Without hesitating, Peter ran out the door.

Thomas got tired of waiting, and left the room. A while later,Peter returned, holding some of the burial cloth in his hand. "He wasn't there . . ." he said, sadly. "He just . . . wasn't there."

Then a voice sudden said, "Peace be with you!" The room fell silent. All eyes were on the man that had just appeared in the room. "The father has sent me, now I am sending you." He touched each of their heads and breathed on them. "Receive the Holy Spirit. Forgive others of their sins" he commanded. Then he left.

Soon after, Thomas returned. They told him what had happened. He thought everyone must have gotten into whatever wine Mary'd been drinking.  "Unless he appears to me right now and shows me the marks in his hands and the wound in his side, I will not believe it."

A week later, the men were sitting down to dinner. Then, as before, a familiar voice said, "Peace be with you!" He looked at Thomas. "Hello Thomas." Thomas could barely stammer out a "hello". "Here," Jesus said. "Touch the wounds. Put your fingers here, in the hole. Here, put your hand in my side." He took Thomas' head in his hands and turned it up to face him. "Stop doubting, Thomas. BELIEVE."

Thomas wrapped his arms around his friend in a sobbing embrace. He was embarrassed to have doubted the truth. "My Lord and my God" he exclaimed.

Jesus stayed with the men for some time, teaching them how to run the church now that he was no longer going to be able to. He told them to go and tell the world what they had witnessed. Then, one day, he turned to them all. He blessed them. And then the men witnessed Jesus being taken into heaven by the Lord.

"His return is very soon, and so you better be believin' that our God is an AWESOME God . . ."
- Rich Mullins

Posted by SuperMom Blues at 8:20 AM

SuperMom Blues
I am married to a wonderful man that is the love of my life. I have two amazing kids and two wonderful step children. All of my babies keep me on my toes - and then some! i love to sing, am a recent college graduate (!!!), and have a really great personal relationship with Jesus Christ.

Please comment with your blog URL if you're following from another site! Thanks and God Bless You! 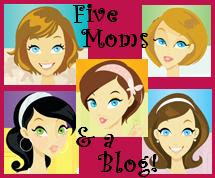